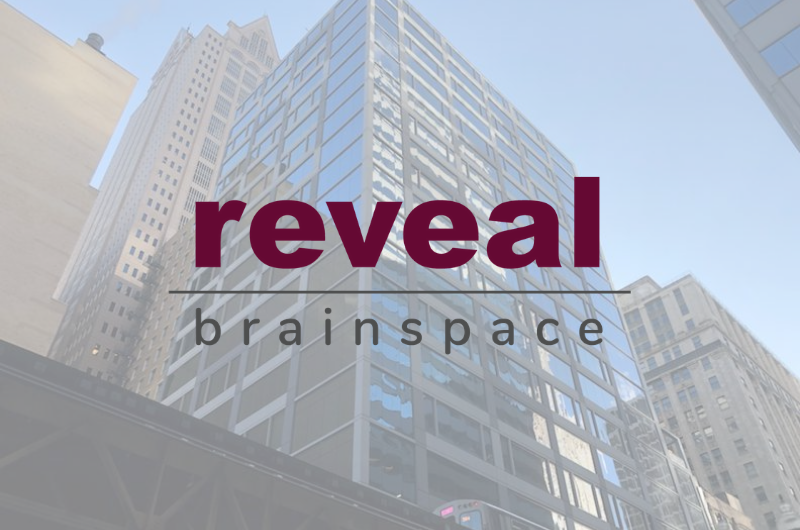 Note: A version of this release appeared in an article by Crain’s Chicago Business.

Reveal Brainspace is a global eDiscovery software provider that has continued a rapid upward climb in the last year. With an abundance of recent hires, it was a necessity for Reveal to expand its space in the Chicago Loop to a newly built office building.

As a leading provider of AI-powered document review software, Reveal has prioritized its in-person working environment by signing a five-year lease. The new office on 145 S. Wells St. has 25,000 square feet of space, a major shift from the 6,500 square feet of its current office on 330 S. Wells.

Although many downtown offices have seen an increase in office vacancies due to the prevalence of remote work, Reveal is trying a different approach. After the eDiscovery company merged with leading AI software company Brainspace in early 2021, Reveal increased its number of employees to around 180 and plans to keep growing, according to Founder and CEO Wendell Jisa. In a recent interview with Crain’s Chicago Business, Jisa stated that Reveal is embracing working in-person, and that the company’s workers prefer maintaining a separation between work and home.

"Our employees want to come to the office, they want to have that interpersonal relationship with folks," he said. "I believe that folks who move to Chicago want to experience Chicago, and putting them in a world-class building downtown and in a world-class city—I feel it will allow us to grow the organization."

After a months-long search that consisted of several office building tours, Jisa secured the 20-story property on Wells that was built by Chicago-based developers Thomas Roszak and Dan Moceri. Although the Central Loop has recently been outshined in popularity by areas like the West Loop and the Fulton Market District, Jisa prioritized the proximity to hotels and train stations of the Central Loop, saying, “It was Central Loop or bust, quite frankly.”

Another major benefit of the building is that there is plenty of space for Reveal’s plan to continue growing. Jisa already has plans to add two more floors beyond what was already leased to facilitate a training space for clients to learn how to use Reveal’s eDiscovery software.

Are you interested in joining the excitement at Reveal? View our open positions here.

Reveal, with Brainspace technology, is a global provider of the leading AI-powered eDiscovery platform. Fueled by powerful AI technology and backed by the most experienced team of data scientists in the industry, Reveal’s cloud-based software offers a full suite of eDiscovery solutions all on one seamless platform. Users of Reveal include law firms, Fortune 500 corporations, legal service providers, government agencies and financial institutions in more than 40 countries across five continents. Featuring deployment options in the cloud or on-premise, an intuitive user design and multilingual user interfaces, Reveal is modernizing the practice of law, saving users time, money and offering them a competitive advantage. For more information, visit http://www.revealdata.com.