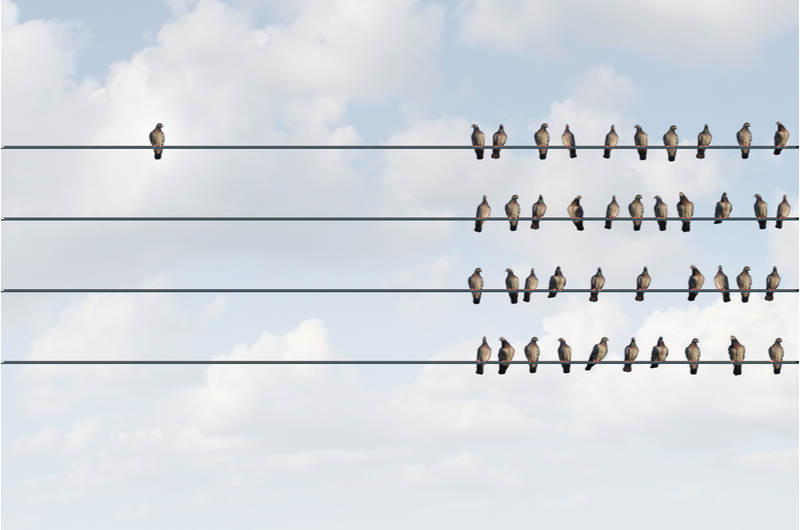 Anomaly detection is a powerful tool for anyone seeking to understand the nuances of complex datasets. While many eDiscovery and machine learning tools offer some basic ability to detect data anomalies, few tap into the possibilities opened up when a wide array of anomaly detection capabilities are incorporated into the search, data analysis, and display functions of an eDiscovery platform.

Today, we take a look at the exquisite magic that is data anomaly detection.

What Is Anomaly Detection?

Why Does Anomaly Detection Matter?

Anomaly detection is an exploratory tool, helping you find meaningful stories in your data and pointing you in directions you might not have considered. Anomaly detection is also a critical thinking tool, giving you the power to test stories, find weaknesses in them, and figure out how to make them stronger or tear them down.

Here's a real world example: I first encountered the notion of searching for anomalies or outliers in a matter we began working on in the late 1990s and took to trial in 2002. We represented the defendant. The plaintiff's case appeared to be compelling. The plaintiff alleged that a defect in a component part from our client caused plaintiff's product to fail prematurely. The plaintiff sought hundreds of millions, and then well over a billion, of dollars in damages. Information to be gleaned from the plaintiff's initial productions seemed to support their story of the case.

We were not content to accept the other side's version of events (what good defense counsel would?), so we pushed for more discovery. After several court orders, the plaintiff ultimately delivered to us the full contents of the IBM AS/400 they used to run their business. We received a huge amount of data, by the standards of the day. It included manufacturing, component parts, sales, customer complaint, complaint inspection, and other related data information, some of it structured and some unstructured. The data came to us on 40+ tapes. We restored the data from the tapes and converted it to SQL. We loaded that data onto a tower PC that sat in my office.

One of the expert witnesses we worked with was an econometrician, part economist and part statistician. Also on the team were experts in finance, forensic accounting, and data analytics of various stripes. Together, we explored the plaintiff's data along with the inspection data. We formulated and executed SQL searches and dumping the results in Excel and SAS for further and more nuanced analyses.

Our econometrician insisted that we search for outliers. Here is how he explained the process and our objectives, as I recall:

Using this outlier approach, we crafted a new story that our experts thought better fit the data. When we mapped out the new story, we found far fewer spikes and little of interest at either end of the curve. The new story: The plaintiff grew too fast, as the company grew they lost control of the quality of their product, hence the failures.

Ever since working on that matter, I have been on the lookout for eDiscovery technology that would give me that ability to find and explore multivariate anomalies - and I have sought technology that gave me the ability to do this without having to deploy an extensive and expensive team of experts to get there.

What You Can Do With Anomaly Detection

Today's data scientists have developed algorithms that deliver on that vision for use cases many of us never would have foreseen back then. Here are some of the things for which anomaly detection is used these days:

Just as anomaly detection methods can be used to find outliers in banking, construction, and medicine, it can be used in eDiscovery to find behavioral or other patterns that help build up or tear down the story of a case.

Reveal AI gives you the ability to find and work with anomalous data in various ways. Anomalies are brought to light via the use of entities, sentiment, topics of interest, and related people. Specific ways of working with that data include cards and baseball cards, discussed below, as well as others we will address another day.

Reveal AI lets you look for anomalous data about entities, both named entities and custom entities. To better understand what you can do with entities and anomaly detection, first it helps to know what we mean by entities.

A named entity is an extracted piece of data identified by proper name by Reveal AI. The data might be extracted from a person, place, thing, event, category, or formatted data such as a credit card number. By default, Reveal AI identifies over 21 entity types; you can train the system to identify yet more. The standard named entity types include:

A custom entity is an entity type that you create with AI models. You build custom entities using your data and you design them to fit your workflow. Once you create a custom entity, you can use it the same ways you would use any other named entity, including to create yet more AI models.

Once you begin to work with entities, you can start using information associated with those entities. Here are some of the ways you can do that.

Reveal AI also looks at sentiment in the aggregate and displays the results in cards (more on cards below). For the example below (and using Enron data), I selected the card view and sorted the cards by sentiment, from highest sentiment to lowest. 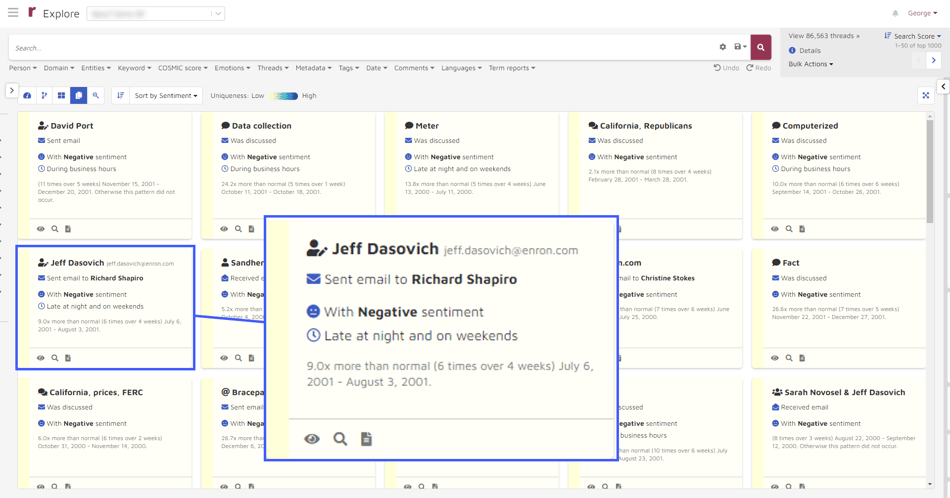 In the highlighted card, you see that Jeff Dasovich sent email to Richard Shapiro with negative sentiment late at night and on weekends. He did this nine times more than normal - six times over four weeks - from July 6, 2001 to August 3, 2001.

By finding negative and positive sentiments, Reveal AI adds greater context to the patterns you find in data and the stories you can construct from those patterns. 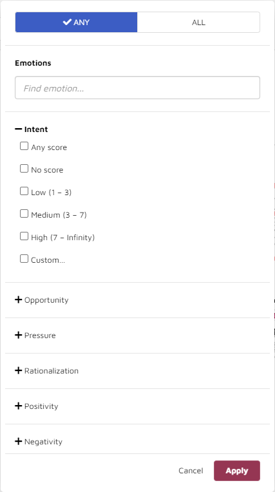 Topics are the most representative and information phrases that Reveal AI finds in the text available to it. Reveal AI computes topics based on summary phrases from each communication as well as the context of the communication if it is part of a larger thread. A single communication can contain multiple topics.

Topics of interest vary from one person to the next, as shown by the three examples below.

In Reveal AI parlance, related people are people who have out-of-the norm but meaningful connections with an individual.

Here is how that information appears: 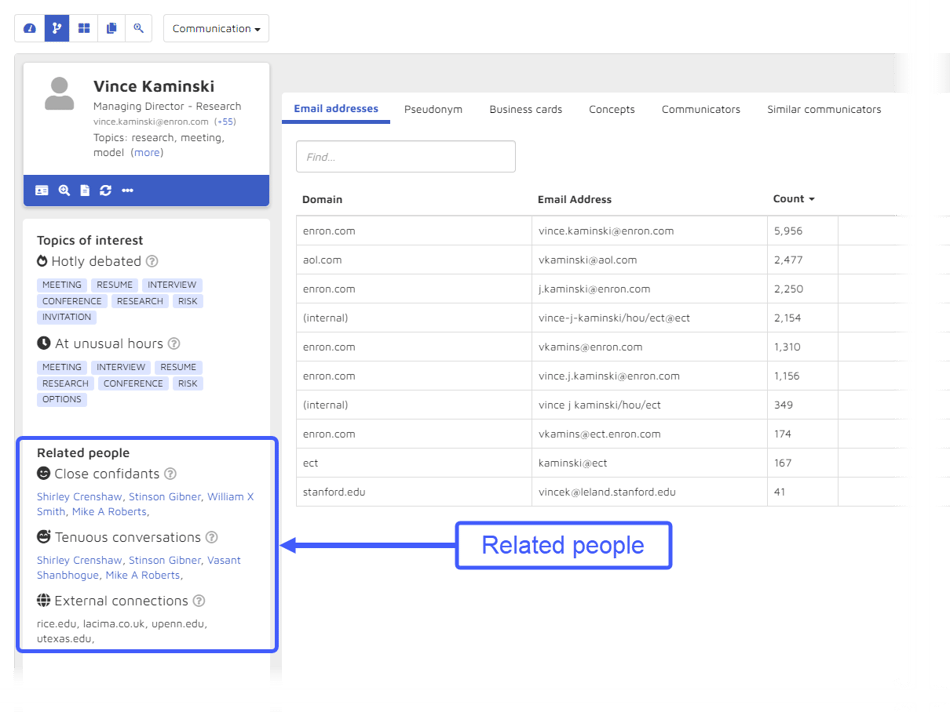 Reveal AI's cards represent patterns in a user's data, a way to organize and present anomalous information. When you go to the card view, the platform dynamically builds a set of cards. 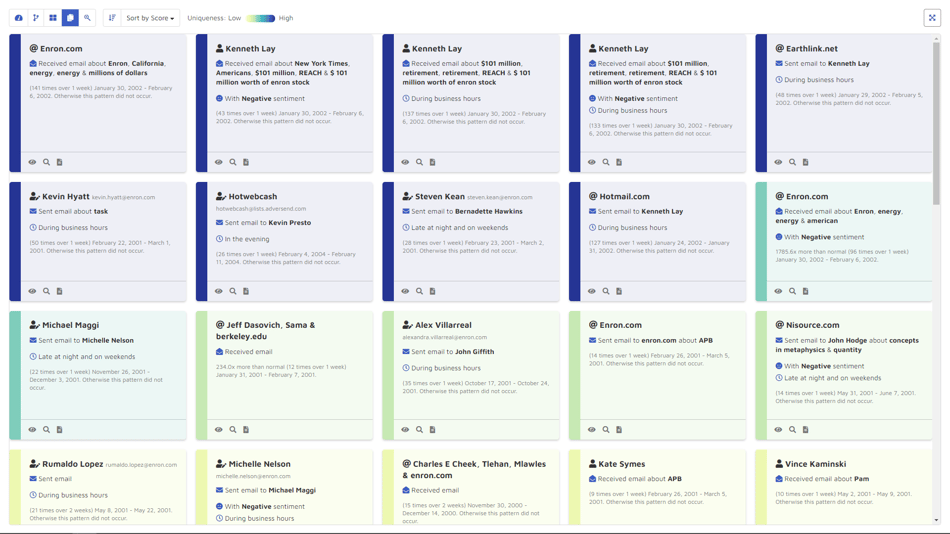 Each card represents a story found in the dataset. Here, for example, is a card showing that during a one-week period, Ken Lay received email messages from a Hotmail account, a pattern that does not appear elsewhere in the data. This might not be important, but it could be something worth exploring.

You can sort cards by score, count, weeks, sentiment, work shifts, and start date - each ways that let you bring outliers to the forefront. Which each of these options, you can sort is descending or ascending order.

Score is the uniqueness of the pattern. In the example above, the cards are sorted by score, from most unique to least. To help you get a quick understanding, levels of uniqueness are color coded. Cards whose patterns are very unique are blue. Moderately unique cards are green. Common cards are yellow.

Weeks shows the number of weeks a pattern exists. In that same example, the pattern appeared during only one week.

Sentiments, discussed above, are identified in cards as positive or negative.

Work shifts show when a pattern took place. Options include late at night and on weekends, in the evening, and during business hours.

Start date lets you sort by the first date in a pattern. 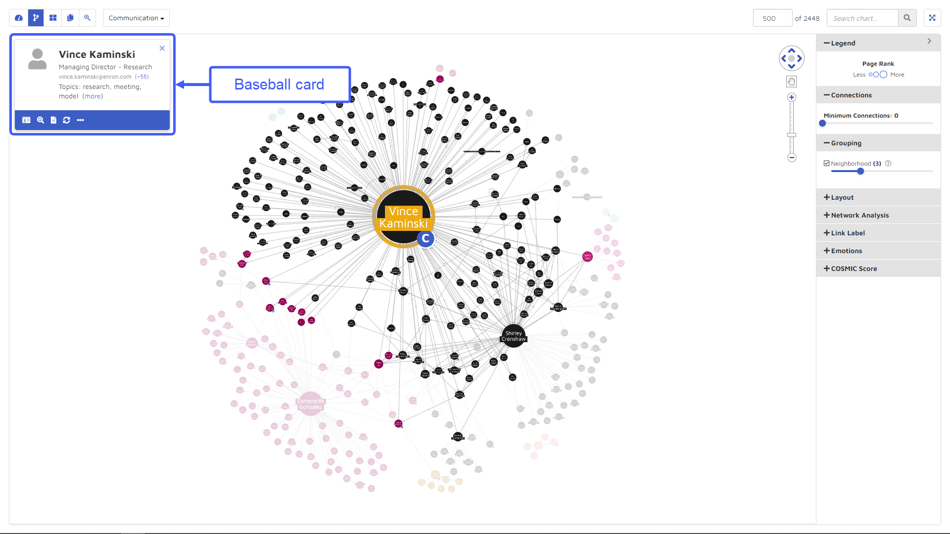 If you click on the icon at the bottom-left corner of the baseball card, that opens the activities page for Vince Kaminski. 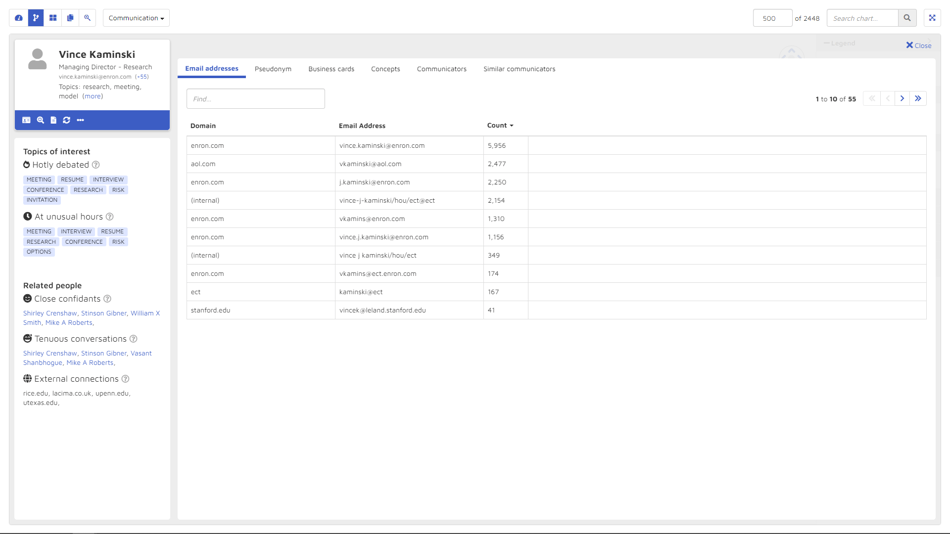 Right away, we see indications of anomalous behavior.

Topics of interest, discussed above, are shown on the left. The hotly debated section lists the top seven topics Vince Kaminski wrote about with medium or high negative sentiment. For him, those topics are meeting, resume, interview, conference, research, risk, and invitation. The at unusual hours section shows the top seven topics Vince Kaminsky wrote about after work hours: meeting, interview, resume, research, conference, risk, and options.

Related people, also discussed above, are shown below topics of interest. This areas shows that Vince Kaminski's closest confidents were Shirley Crenshaw, Stinson Gibner, William X Smith, and Mike A Roberts; he has the more tenuous conversations with Shirley Crenshaw, Stinson Gibner, Vasant Shanbhogue, and Mike A Roberts; and his most frequent external connections were with the domains rice.edu, lacima.co.uk, upenn.edu, and utexas.edu

The baseball card activities page shows much more. There are sections for:

Ready to Go Forth and Detect?

When implemented in an eDiscovery platform, anomaly detection systems can be exquisitely powerful tools. It can enable you to search for local outliers. This capability means you can use the system's anomaly detection algorithm to "tell me something I don't know", where it surfaces potentially potent behavioral patterns. With those patterns, you can build your story of the case, test the story told to you by your client, interviewees, and other witnesses, and look for weaknesses in what you expect to be the other side's story of the case.

In this post, I discussed only a few of the many forms of anomaly detection available with Reveal. If your organization is interested in optimization of your eDiscovery process through an innovative use of anomaly detection, as well as more about our AI-powered end-to-end document review platform, contact us to learn more.