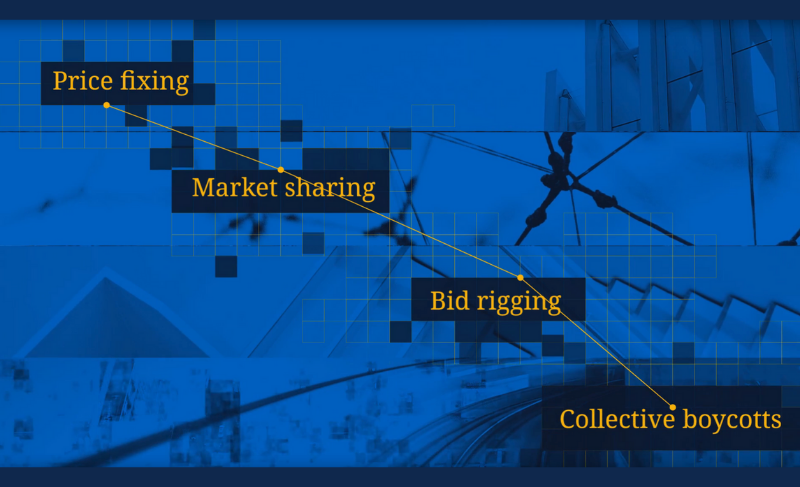 What is a Cartel?

A cartel is when two or more competing businesses illegally agree to rig the market in some way and to not compete with each other. The desired outcome is to dominate the market using tactics such as:

Although plenty of examples of cartels involve corporations intentionally colluding and knowingly engaging in illegal anti-competitive practices, it is possible to participate in a cartel without knowing your company is crossing that line into illegality. In fact, many businesses don’t know that practices such as market sharing are illegal. That’s why employing a risk detection service is so crucial.

Some of the consequences of involvement in a cartel include:

Cartels are an unspoken problem in many industries because they’re difficult to detect, according to Ilan Sherr, Legal Director at DLA Piper and Executive Director of Aiscension. In the last 20 years, authorities in the EU, UK, and US have fined over 1,200 entities for cartels with competition fines that amounted to over €43 billion. While the consequences for cartel involvement are high, detection can be a tedious process because it traditionally involves manual compliance.  This means that companies have to hire teams of lawyers to search for cartel risks, which often requires excessive time and resources. Aiscension is a step forward because it allows lawyers to work hand-in-hand with data scientists - all while leveraging the most powerful AI software in the industry - significantly reducing the time spent on compliance reviews, and freeing up an organization’s resources to be deployed elsewhere.

The cartel model is a pre-trained AI model that analyzes large amounts of data and searches for risk of cartel conduct mentioned above. That means it detects data that indicates those types of anti-competitive activity within a corporation.

Aiscension is different from other risk monitoring applications because the AI learns from every case where it is deployed, improving with every application. Reveal’s AI uses over 60 auto-calibrating AI features to determine which signals are most important to uncover problematic trends that humans may have missed.

The goal is to identify illegal activity early on, or ideally, to prevent cartel involvement before it comes to fruition. Even if a company has already participated in cartel activity, there’s still a benefit to using the model. Being the first company in the cartel to come forward opens the door to up to 100% immunity from fines and an overall more desirable resolution to the situation.

Cartels in a Post-Covid World

The Covid-19 pandemic has impacted how businesses operate across industries -  and is also impacting cartel detection. Since in-person workplaces have become a rarity in the last year, the amount of electronic data that exists has skyrocketed. With more remote work, there’s more digital documentation. This means that cartels are increasingly easier to bring out of the woodwork. Keeping cartels a secret relies on in-person, off the books meetings that make it easier to eliminate any evidence of anti-competitive tactics being used. But, with the restrictions on in-person meetings since Covid, it’s harder for cartels to hide.

The new reality of our increasingly virtual world, magnified by the pandemic, has created a unique moment that presents more possibilities for cartel risk detection. As many have predicted, we believe the increase in digital data will continue in the post-Covid world, and so will regulatory attention. There’s never been a time when corporations have needed a powerful tool for cartel risk management more than right now.